I am so over the moon I can’t express how happy I am!  Just looked at the Coletterie blog and my dress has made the Hawthorn parade!  How exciting is that!  I was just happy to post a picture on the flickr page, mainly as I felt such a sense of achievement on finishing it without making a complete hash of it!  There are so many beautiful dresses on there, it’s really opened my mind to how one pattern can be interpreted in so many different ways and all look fabulous!  The Hawthorn is definitely the most ambitious thing I have tackled so far.  I think  I have learnt a good lesson from following the sew long and that is to just take my time with things and that is why it turned out so well.  I have had a tendency to go at things hell for leather and keep going until it is finished at the expense of everything else!  It was nice just to leisurely potter along with it, doing a little bit every other day.  I have embraced the creases though, when I first put it on I didn’t sit down for an hour as I didn’t want to get crumpled but I decided that wasn’t viable long term!  The pictures don’t really pick up the colour of the fabric as it has a kind of sheen on it when it falls on the bias, a little bit like shot taffeta (hope you know what I mean because I’m not sure how to explain it!) It was very cool to wear as the temperature reached 91 degrees here in Derbyshire this afternoon.  I’m now planning my next Hawthorn, I’d like to make an Autumnal  one . 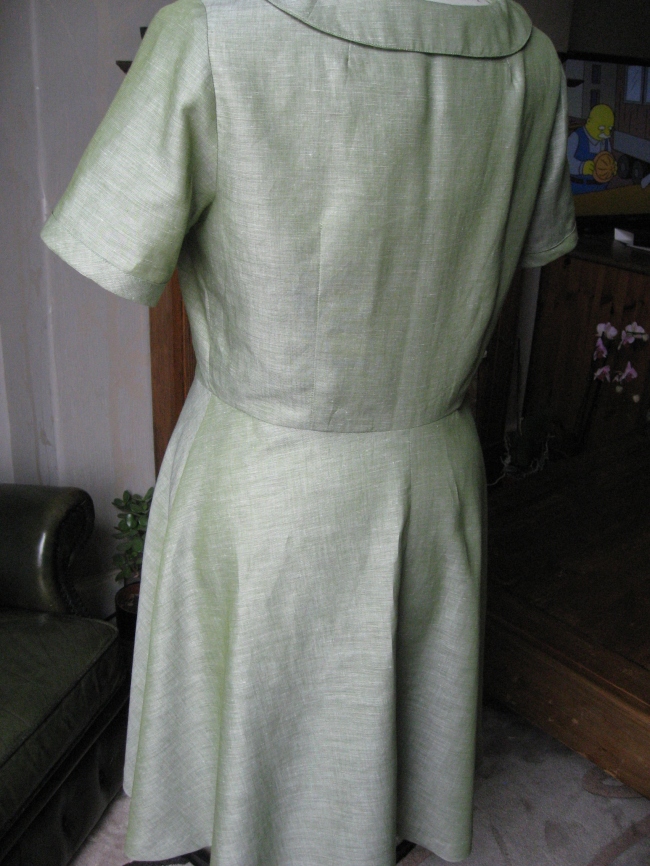 The Portrait Blouse is coming along even though I spent a day trying to decide which way up the fabric should go!  I decided that one way was a sort of feathered effect and the other was a scale like pattern, I thought it would be more flattering looking like a bird rather than a reptile! I’m going to finish the neck, armholes and hem with bias binding.  I tried it on last night after finishing all the seams and putting the zip in and my first thought was ‘it’s a bit mad men’!  It is very fitted around the waist and consequently makes the girls look enormous!  I think it will be perfect tucked into a skirt but I’m hoping that it may be passable with some black capri pants.  Will add pictures once it’s finished!

We are off to the sea side in a couple of weeks, annual trip to Anglesey which is absolutely beautiful.  Prince William is stationed just a mile up the beach so every time a helicopter goes over we always wave(along with everybody else!), just in case it’s him.  I think he’ll be elsewhere this year though!

i’m trying to put together as much as a me made wardrobe as possible to take with me so today decided to butcher a pair of old jeans to use up the red flowery fabric I made my last Sorbetto with.  I made a belt and headband as well!

My next big project is the new Anna dress pattern from By Hand London.  I wasn’t too fussed to start with as being 5ft 1in maxi dresses seem to drown me but I have seen some lovely ones on the blogs, especially at handmadejane, did you make that? and sew busy lizzy (will work out how to do links when I have more time!)  The pattern arrived today and it’s beautiful!  Just about to have a rummage through my stash and see what I can come up with!

So pleased about the Hawthorn parade, going to celebrate with a long bath and a bottle of Crabbies Ginger Beer! (little pleasures are the best!)