A bit of knitting today, I finally finished my Owl sweater!

I cast this on just after Christmas and finally finished it a fortnight ago so it’s taken me around six weeks. I could have finished it lot earlier as the chunky yarn knits up really quickly.  However, I only get chance to knit in the evenings when it’s frequently too late and I’m too tired to do anything. The pattern is Owls by Kate Davies and it’s probably one of the most popular patterns on Ravelry.

I used Rowan Purelife British Sheep Breeds Chunky Undyed yarn in Mid Brown Jacob which is available from Laughing Hens.  (It’s actually more brown in real life but i’ve struggled to get a true picture) I love the idea that the yarn is undyed and the colour of the sheep from which it came, here’s a Brown Jacob in all it’s glory:

There were a couple of reasons for my yarn choice, the main one being it was the one suggested for the pattern and the right yarn for the gauge, the thought of adapting the pattern for a different weight yarn fills me with dread (and I know I’d bugger it up and end up with a sweater that would fit a seven year old!). I had been contemplating some shade of purple but in the end thought an owly colour would be more appropriate. The yarn is quite raw and slightly itchy, every now and then I’d come across a bit of hay. It has softened up quite a bit since washing but it still warrants wearing a t-shirt underneath.

The sweater is knit bottom up and in the round. The body is put on hold while the sleeves are knit and then it is all joined together before starting the owly yoke. I knit a size 6 which I think is a 42 inch chest, there is a couple of inches of negative ease in the final measurements. I actually knitted a gauge swatch for once and was pleasantly surprised when it was spot on. I based the length of the body and sleeves on an old sweater I have which is the perfect fit. (so nice to have sleeves the right length!) There is an extra Owl for each size increase and I ended up with twenty one on mine. The Owl pattern is really easy with only three rows of cables over the ten row pattern. I was a bit undecided about the button eyes, I initially got some mother of pearl ones but they stood out far too much, luckily I found these tiny brown buttons in my local haberdashers which I think are perfect. Sewing on 42 buttons however was a real chore! 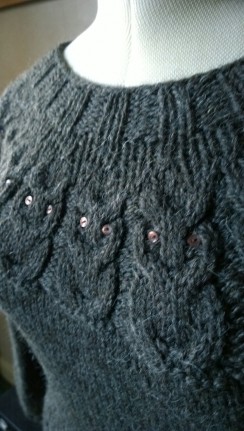 I blocked the sweater by putting it through a wool wash on my machine followed by a short spin (to the horror of my mother in law who was convinced it would shrink!)   I then laid it out on a towel shaping it to the final measurements.

Overall I love this pattern, it’s quick and easy and would be perfect for a beginner. It’s exceptionally warm, I haven’t needed a coat when I have worn it so it’s perfect for working on the project. I should get a few weeks wear out of it before the weather warms up and I can look forward to wearing it again when the Autumn comes around again!