Hosted again by the lovely Zoe of sozowhatdoyouknow

‘Me-Made-May’15 (#mmmay15 for social media interaction) is a challenge designed to encourage people who sew/knit/crochet/refashion/upcycle garments for themselves to actually wear and love them. The me-made and self-stitched challenges have been taking place for five years now and they work on both a personal and community level. The participants decide the specifics of their own challenge pledge, so that the month is appropriate and challenging for them. For example, a very common pledge is for a participant to aim to wear one self-stitched or refashioned garment each day for the duration of May 2015. The participants can also choose to document their challenge with daily photos (though this is in no way compulsory for taking part) and share them with other participants.’

Last year I made things difficult for myself by pledging no repeats. Although I did manage to achieve this by swapping around tops and cardies by the end of the month I was a little desperate!   It was good to know that I had enough clothes to see me through but what killed me was only being able to wear favourite outfits just the once!

This year I am pledging to wear all me made clothes (apart from Jeans, bras and maybe the odd pair of socks) along with me made knitwear and knickers for the whole month of May.

I have thankfully lost a little weight so should be able to fit into last year’s clothes. If not I may spend the first couple of weeks in Lady Skaters and Weekend Doris’!  I’ll be posting daily blurry bathroom selfies on instagram.  I have finally realised that I can link my instagram account (justsewtherapeutic) up to my twitter account (helen_justsew) so they’ll probably end up on there too.  (I’m trying to persevere a bit with twitter, although I am a little worried about adding to the time sink of Instagram and Feebly.  I do spend a fair amount of time admiring others projects when I should be getting on with my own!)

Are you joining along this year and if so what are you pledging?

After making my last two wearable muslins of the Sureau I finally felt brave enough to cut into the liberty Mitsi fabric (the pattern and fabric was a Christmas present so I really didn’t want to mess it up!)

For this final version I:

It came together really quickly but not without sacrifice, while attaching the skirt to the bodice I was concentrating so much on keeping the gathers straight that I sewed straight through my finger! 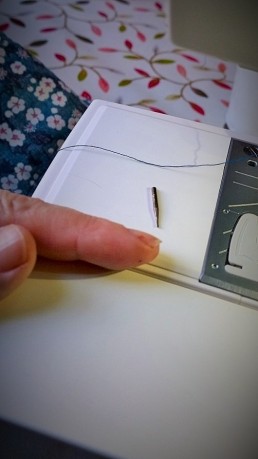 I didn’t hem it as short as last time and ended it just around my knee, I figured I can get away with a shorter skirt if I am wearing tights but exposing my bare saggy legs is not a good look (especially with how white and pasty they are after the winter!) I spent ages looking for the right buttons and eventually settled on the mother of pearl flower ones. 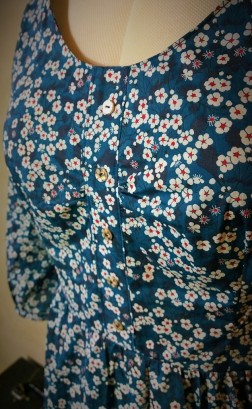 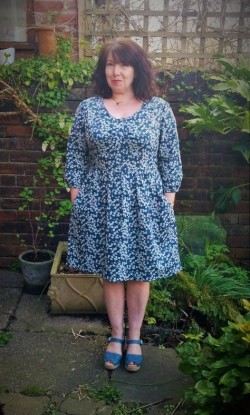 I have been taking a good objective look at which things I actually wear in my wardrobe, particularly knit wise. My most worn RTW cardigans are Navy (one plain, one polka dot) and grey (again one plain and one polka dot!) I usually pick yarn purely on whichever colour takes my fancy at the time which has led to some lovely cardigans but with fairly limited ‘wearability’. I decided to fill an obvious gap by knitting a Navy Miette. I have knitted the Miette twice before and for me it is the perfect cardigan; fitted and simple with a little bit of lace to add interest. Another plus is the raglan sleeves, I’m quite broad in the shoulders and I’ve found that set in sleeves can look quite boxy on me, (I slightly resemble a rugby player!) 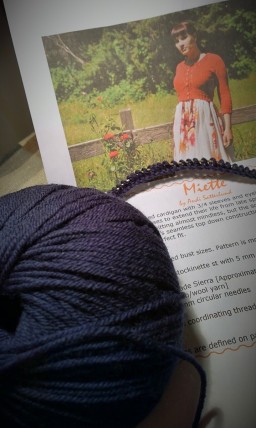 I cast on a size 42 and used Cascade 220 in Navy 854 bought from laughing hens. The only modification I made was adding 4 inches to the length (another 20 rows) I blocked it in my usual fashion by putting it through a wool wash in the machine. I used ten mother of pearl buttons, 2 more than the pattern to account for the extra length. 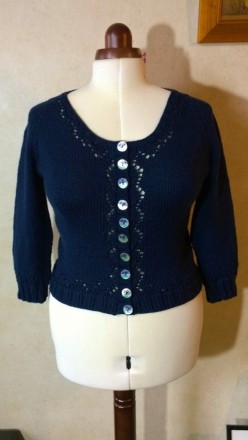 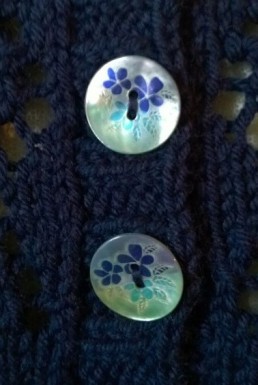 I finished both in time to wear for the Easter weekend. I love the whole outfit and have worn the cardigan almost constantly since it was finished (I’ve since cast on another Miette in Silver Grey!) I like the style of the Sureau and now I’ve added the pockets it’s earned a place as a TNT pattern in my collection (pockets are a serious deal breaker for me!) 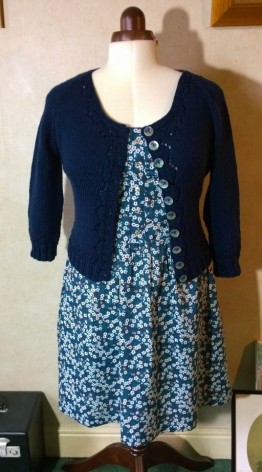 The Liberty Tana Lawn is lovely to sew with. I’ve got some Liberty Cotton Poplin to try which is possibly going to become a Chardon. 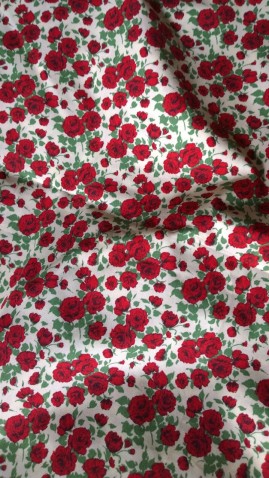 I also took the plunge and bought two and a half metres of their Summer Tana Lawn which I’ve been lusting at for over a year (No idea why they named it Summer, it’s the least summery fabric they have) I’m thinking of a simple dress with possibly a pleated skirt, not decided on a pattern yet though so I might try using the Emery bodice and drafting my own skirt (I’ll definitely be making a wearable muslin first) 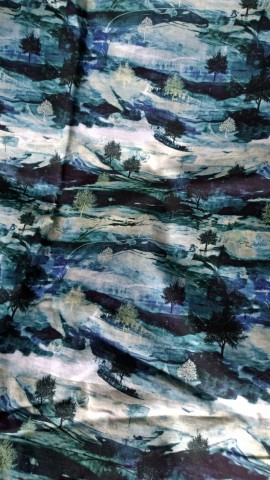 I was hoping to have enough of the Mitsi left over to make some matching knickers but I’m afraid it wasn’t to be. It has reignited my longing for more Liberty knickers though, I’ve found a couple of remnants that are big enough so I think I’ll have to start the production line again soon!