There hasn’t been a lot of sewing going on recently, we’ve been doing some rather extensive decorating and even though I’d hoped to get a bit of sewing time in, the house has been so full of stuff there’s not been much room to manoeuvre. Coupled with every spare moment spent with a paintbrush my me time has been seriously reduced and my stress levels have been conversely elevated!

One thing I did manage to complete was the Rachel wrap dress from Maria Denmark, I’d cut this out before the decorating but then had to abandon it:

This jersey dress features a plunging neckline, that hugs the body due to the wide ribbing, cut shorter than the neckline. It has short or elbow length sleeves and ties, you can tie around the waist or at the side.

With no darts or special details, this is a relatively fast and easy dress to sew. You can make it today and wear it tomorrow!

Make your dress in a dark wool-blend jersey for wearing with tights and boots in the colder months, and make a short sleeved version in a brightly coloured rayon-jersey to wear with great heels for the summer wedding, you are going to.

This is the third of pattern of Maria’s I’ve tried (The Edith blouse and the Kimono tee being the others) I was keen to try another knit dress as I wanted a bit of a variation from my Lady skaters. The fabric I used was a Liberty Jersey, it was a factory second from Ebay and a third of the price of its usual selling price. The only fault I found was a slight mis-print on part of the selvedge. This was the first time I’d sewn with Liberty Jersey, they have different weights and compositions (the full selection can be seen here) this one was a Clarendon which is medium weight and quite stable. My hopes for it were high as it pre-washed lovely. 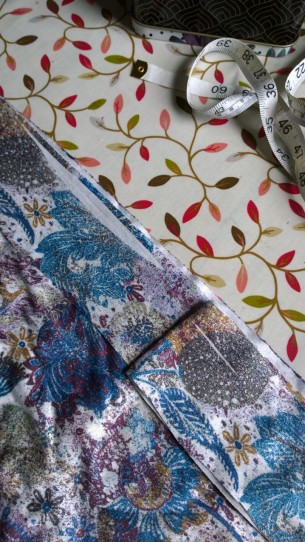 The size range is broad, going from a 34 inch bust up to a 54 which is a 47 ½ inch bust, 41inch waist and 50 ½ inch hip.   I cut a size 44 and did a 4 inch FBA following Maria’s tutorial for doing a full bust adjustment on a knit dress. I used nearly 3 metres of fabric (and made a matching headband with some of the leftovers, then decided it was too much!)

The Liberty was lovely to work with and the construction is straightforward and quick to sew up. I only made one deviation; Maria instructs you to sew the right side of the dress (The side with the opening for the tie to pass through) on a regular sewing machine and back tack at either side of the opening. My waist is the main stress area in any garment, expanding throughout the day due to lunch, sneaky chocolate eating and an apparent hereditary water retention problem (diagnosed by my mother who kindly told me I was getting to ‘that age’) I’m also not 100% confident with the stretch stitch on my new machine as I’ve had a couple of stitches pop on previous garments. Instead I overlocked the edges of the opening, then overlocked the sleeve and bodice seam above and the skirt seam below, I opened out the seam allowance and stitched it all down. It’s now thoroughly secure and should withstand a lot of abuse.

One thing to watch out for is the first step, which is to attach the ties to the neckband and then set them aside. I didn’t have a problem with my muslin but I had to shorten the neckband on the Liberty as it didn’t stretch tight enough, I think this is purely down to a difference in the amount of stretch but I would recommend waiting until the dress is constructed and just checking the length before attaching the ties.

The neckband is stretched as you would with a normal knit neckband until a point just above the bust, then the bit between there and the waist is stretched to the limit which makes the fit around the bust very secure with no chance of gaping. 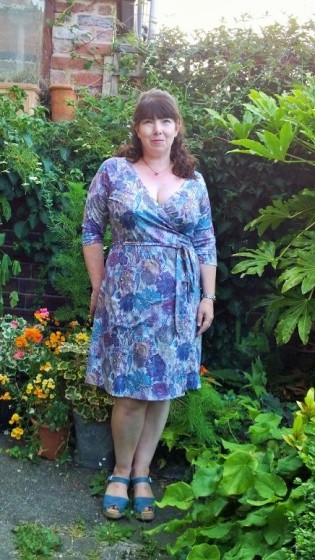 I’ve never sewn a wrap dress before and the finished silhouette is a bit of a departure from my usual style but I quite like it and feel strangely ‘grown up’ wearing it. I was initially a bit unsure about the boobiness of it but had to keep reminding myself that as I was looking down I had a birds eye view. I have worn a camisole underneath but I wanted to show you the dress in its natural state! It’s been great to wear with sandals, especially as the great British summer has provided the need for sleeves but I think this dress is really going to come into its own during the cooler months, it’s perfect for layering and will be great with boots and a cardigan. It’ll be a good alternative to my ladyskaters, I’ve already got another more autumnal version in the queue with more bargain bagged liberty jersey!

#memademay2020 day 30: I’ve got changed three times today. Started off with this @deer_and_doe_patterns Myosotis dress, went to the garden centre for a bag of potting grit and ended up spending £50 (My plant habit is just as bad as my fabric one!) Changed into shorts and an Ogden Cami to do a bit of planting, got too hot and bothered so I’m now in my old blue Southport dress with the drawstring undone, there’s good reason why it’s my favourite dress pattern! #memademay
#memademay2020 day 29: @grainlinestudio Willow top. Managed to get out of the heat by having a lovely walk through the woods to Linacre #memademay
It looks like the box is staying! #catinabox #catsofinstagram #catstagram #humphreycat #maddiecat #whyaremycstssoweird?
#memademay2020 day 28: I forgot to get a picture of what I had on when I was out but this is what I put on when I got home. It’s probably around eight year old and ‘self drafted’ It’s 2 metres of fabric with a shirred boob tube bit and added straps and pockets. I bought the fabric and didn’t have a clue what to do with it as the print runs down the length and each pattern stripe is different. It’s lovely and cool to wear when it’s hot, I really should get around to making another one. #memademay
Follow my blog with Bloglovin
Follow Justsewtherapeutic on WordPress.com